This is a story of two competing influences. On the one hand, Vauxhall and Kennington are very close to Westminster - the seat of government - and to the City of London - the economic capital of the country. The area has therefore been the home of princes, archbishops, bankers, Members of Parliament and many other "great and good". But the River Thames - although a great transport artery and link to the wider world - cuts the area off from both Westminster and the City. As Americans would say, the area is on "the wrong side of the tracks". But let's begin at the beginning ...

Dinosaur food can still be found in Vauxhall Park and Fentiman Road. Follow this link to the world as it was 270 million years ago.

Compared to dinosaur food, the river Thames is a recent creation - a canalised river which is much narrower and deeper than the shallow meandering multi-channeled river that helped feed our predecessors. But the development and history of the Vauxhall/Kennington area has been profoundly influenced by the area's situation just south of the point at which the river first becomes fordable. Indeed, Vauxhall is the site of the oldest structures in London.

The next oldest transport link is marked by Kennington Park Road and Clapham Road. This long stretch of road is characteristically long and straight because it follows the old Roman Stane Street. This ran down from the Roman London Bridge (a short distance downstream from the present one) to Chichester via the gap in the North Downs at Box Hill near Dorking.

Another Roman road branched off opposite Kennington Road and went down through what is now Kennington Park and down the Brixton Road. It carried on through the North Downs near Caterham to Hassocks, just north of the South Downs.

The next major developments were on the other side of the river where a great abbey - called Westminster to distinguish it from St Paul's which lay to the east - was founded in the early 700s. It became a royal church and the whole area began to develop into one of the main centres of London Life, with the construction of Westminster Hall beginning in 1097. It was natural, therefore, for powerful people to frequent both sides of the river, and an early mention of Lambeth - the area opposite to Westminster - dates from the Anglo-Saxon chronicle of 1042.

King Harthacnut, whose name means 'tough knot' was the son of King Cnut and Emma of Normandy. He ruled England for just two years from 1040, though he had also sat on the Danish throne since 1035. Harthacnut's early demise came about under deliciously mysterious circumstances. The young king, aged something like 24, was at a wedding in Lambeth, probably where the Archbishop's Palace stands today. The happy occasion soon turned to tragedy. According to this account, Harthacnut rose to toast the bride and groom but never completed his speech. He 'died as he stood at his drink, and he suddenly fell to the earth with an awful convulsion; and those who were close by took hold of him, and he spoke no word afterwards'. He was succeeded by  Edward the Confessor — the king who founded Westminster Abbey (who may have arranged for Harthacnut to be poisoned) and whose death in turn set in motion the Norman invasion and the Battle of Hastings.

The word Lambeth, by the way,  is a shortened version of Lambehitha which means a landing place for lambs, which again helps emphasise the vital importance of the Thames to this history. 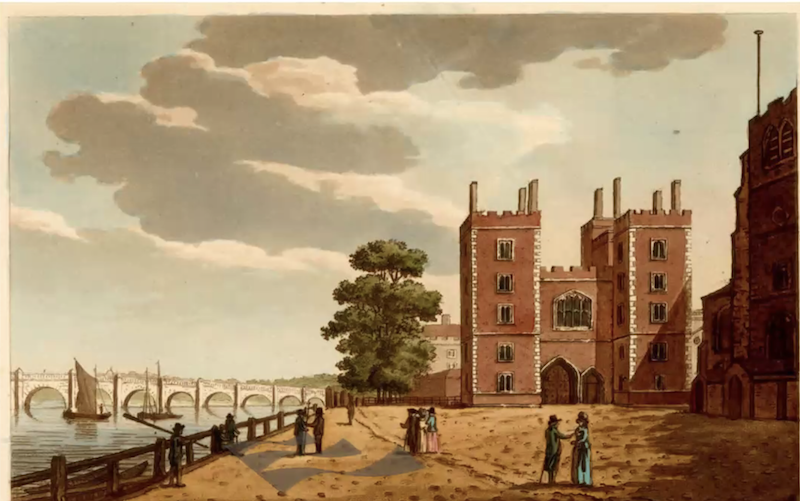 Powerful people in due course began to acquire land just south of the river, which was easily accessible by boat or horse ferry (hence "Horseferry Road" leading to what is now Lambeth Bridge). In particular, the Archbishops of Canterbury acquired Lambeth Palace (pictured above - well before Lambeth Bridge was built nearby) just the other side of the horse ferry, in the late 1100s.  The bridge in the painting is Westminster Bridge.

Many years later, Guy Fawkes and his fellow Gunpowder Plot conspirators found Lambeth to be conveniently close to Westminster when they needed somewhere to store their 20 barrels of gunpowder in the days leading up to the 5th of November 1605. They then transported the gunpowder over to the Houses of Parliament by boat. 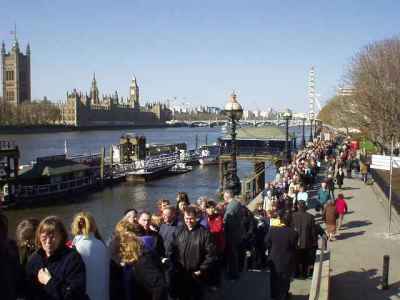 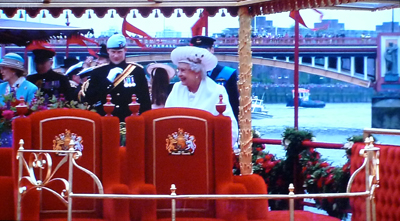 More recently, Lambeth's closeness to Westminster caused it to be in the news in April 2002 when it hosted a large part of the mile-long queue of those wishing to pay their respects to Queen Elizabeth the Queen Mother - see the photo above. And then the Queen Elizabeth II's Diamond Jubilee Pageant passed under Vauxhall Bridge on 3 June 2012 - see right hand photo above.

Visiting the UK in 2015, Indian Prime Minister, attended by the Speaker of the House of Commons, unveiled a bust of Basaveshwara. Click here for more detail.

Further up the river, in South Lambeth, the young widowed daughter of the Fitzgerold family, Margaret de Redvers, had a house in what is now Vauxhall. She married a mercenary soldier Falkes de Breauté who was hired to do some of the dirtier military deeds of King John (1166-1216). (Breauté is a small town north east of Le Havre in France.) Falkes thus acquired Margaret's London house whose site gradually came to be known as Fawkes Hall. This became corrupted over the years to Foxhall and then Vauxhall.
In return for his dirty deeds, Falkes was granted the manor of Luton by King John. He was also given the right to bear his own coat of arms and chose the mythical griffin as his heraldic emblem. The griffin thus became associated with both Vauxhall and Luton in the early 13th century.

A little further from the river, Edward III gave the manor of Kennington to his oldest son Edward "the Black Prince" in 1337, and the prince then built a large royal palace between what is now Cardigan Street and Sancroft Street. Parliament met in the palace in 1340 and 1342, and Geoffrey Chaucer, the inventor of the printing press, was employed at Kennington as Clerk of Works in 1389. He was paid 2 shillings (10p) a day. The palace was often used by royalty, including King Richard II and Catherine of Aragon, later wife of Henry VIII, who demolished the palace in 1531 so that he could use the the building material for his new palace in Whitehall. However, much of Kennington continued to be owned by Monarch's elder sons (the Princes of Wales and Dukes of Cornwall) to the present day.

(The Black Prince was a fierce and successful warrior who played a key role in the 100 years war against the French, winning an astonishing victory against the odds at Poitiers. He died in 1376, just shortly before his father also died. The prince's 10 year old son, Richard II, then inherited the crown.)