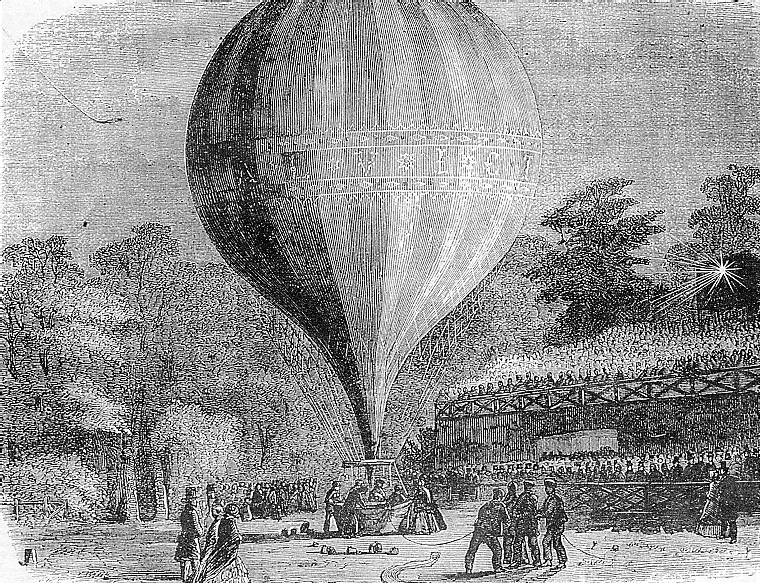 The Vauxhall Pleasure Gardens (also known as Spring Gardens) were opened by the Tyers family in 1661. Some years later, Jonathan Tyers undertook the hefty task of re-imagining the slightly disreputable old gardens into an innocent and elegant venue for families and people of all classes. However, with an admission charge of one shilling  in reality it was out of reach for most people. He  was inspired by a meeting with artist and moralist William Hogarth, who advocated  the value of creating something that sent a moral message cloaked in the guise of humour and entertainment. We now refer to this as ‘family friendly’.

The gardens reached the height of their popularity in the early 1800s, with 20,000 visiting on one night in 1826.  Their winning formula combined music, illuminated fountains, fireworks and light refreshments in an Eden-like atmosphere. The12 acre (5 hectare) gardens originally combined genteel areas (where orchestras played and visitors promenaded in their finery) and 'dark walks' where couples could enjoy each other's company in some privacy, if not in comfort.   As Kennington Runoff put it, Tyers, 'created a wooded and dark area called the Grove. We will leave it up your imagination what went on in the Grove, but let’s just say it was dark and proved very popular.'  This combination took some policing, and the Tyers employed their own policemen, probably the first organised police force in London.

Casanova was, perhaps inevitably, one well known visitor. His memoirs record that a male friend discussed an acquaintance in the following terms: "It was one evening when I was at Vauxhall, and I offered her twenty guineas if she would come and take a little walk with me in a dark alley. She said she would come if I gave her the money in advance, which I was fool enough to do. She went with me, but as soon as we were alone she ran away ...".

Quoting Kennington Runoff again:  Assignations aside, what Tyers created for those who could afford it was a site for music, dancing, eating and drinking. The paintings in the supper boxes made it in reality the first public art gallery in Britain. On a typical night revelers could be entertained by performers, bands, fireworks, operas and masquerades. George Fredrick Handel became a kind of ‘artist in residence’ at the Garden and performed there regularly.  When Tyers made a profit he drove them directly into new structures and events, making the spot a ‘must see’ on a regular basis.  After Tyers’ death in 1767 the Gardens were passed to his son and this initiated the very slow but inexorable decline of the place. 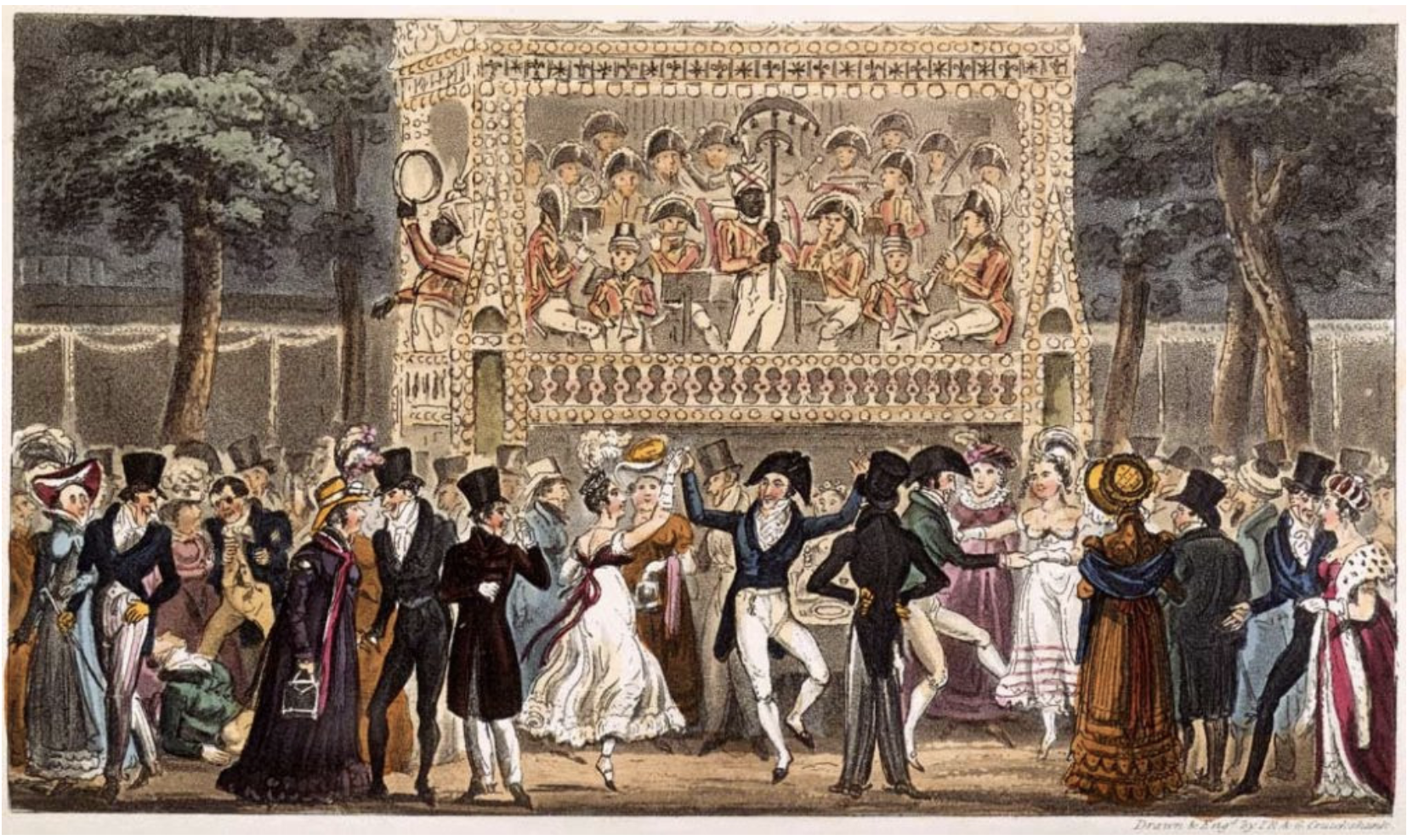 Charles Dickens was less impressed by the Gardens' 'faded splendour' when he visited them in daylight in the 1830s: 'We walked about and met with a disappointment at every turn; our favourite views were mere patches of paint; the fountain that had sparkled so showily by lamplight presented very much the appearance of a water pipe that had burst; all the ornaments were dingy, and all the walks gloomy'.

Growing competition from early music halls and other public entertainments caused the proprietors to become increasingly innovative and offer a wider range of attractions, such as lion tamers and tightrope walkers. They were particularly famous for balloon ascents:- see the 1849 engraving, above.  Here is the story of the most famous flight:

Charles Green (31 January 1785 – 26 March 1870) was an aeronaut, who completed over 500 balloon rides during a flying career that spanned over four decades. His first trip was completed in 1821, and by 1836 he was known as the country’s finest balloonist having completed more than 200 trips. He also flew with some unusual passengers, such as a hippo, and there were plans for a tiger.

It was this all-consuming passion that made him attempt the record for the longest distance ever to be travelled by air. A plan was hatched to depart by balloon from the Royal Vauxhall Gardens to complete a trip so breathtaking, it would take nearly a century for the record to be beaten.

The spectacular balloon created for the journey was a marketing opportunity that would be regarded as priceless even in today’s digital world. 80 feet high and 50 feet broad, the ‘Royal Vauxhall Balloon’ would have been hard to miss in the sky as it departed on November 7th 1836. It quickly became synonymous with Vauxhall itself.

Accompanied by an Irish writer and keen balloonist Thomas Monck Mason, who documented the journey, and Robert Hollond who had backed the expedition, they departed from Vauxhall Gardens (although out of season) and set off in the direction of Paris on their memorable journey.

They sailed on comfortably until the early hours of November 8th, when an unusual sound from the balloon gave some cause for concern. They landed at the nearest opportunity. Locals informed them they had reached six miles left of the town of Freiburg, Germany – around 500-miles from London. Thus they set a record that was only beaten in 1914, by an aeroplane. The entrepreneurial team of the Pleasure Gardens celebrated the achievement by launching a ‘Grand Moving Panorama’ the following year. Visitors were able to imagine the journey by viewing 400 feet of moving canvas with images that brought Charles Green’s extraordinary adventure to life.

It was not particularly easy to get to Vauxhall - at least until Vauxhall Station was opened in 1848 mainly to service the gardens. The nearest Thames bridge was the often very congested London Bridge. But there were many boatmen willing to ferry passengers across and along the river, which was much slower moving than now. Click here for more information about the history of the River Thames.

This 1859 drawing shows Vauxhall in the year that the Gardens finally closed. 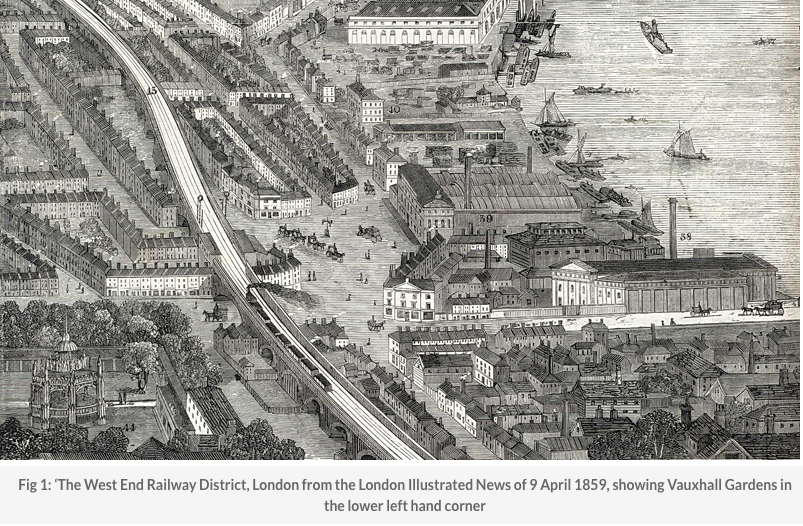 There were numerous other pleasure gardens in London, including at Marble Hill on the river near Twickenham and Cuper's Gardens (aka Cupid's Gardens) down river opposite Somerset House. 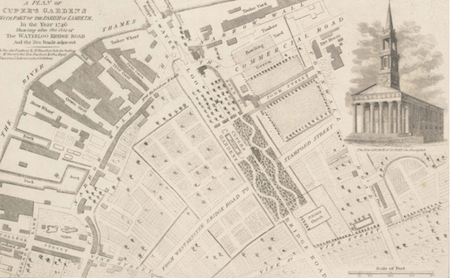 The three most prominent London pleasure gardens were at Vauxhall, Marylebone and Ranelagh. They all thrived as a result of the prosperity of the 1700s which in turn resulted from a relatively stable and democratic British Government and growing international trade, much of it passing through London. As a result, many merchants and professionals found that they had the time and money to visit the opera and pleasure gardens, of which Vauxhall was the most fashionable. The Vauxhall gardens therefore became a model for the Tivoli Gardens in Copenhagen, and numerous other pleasure gardens around the UK and Europe.

Thackery extolled the virtues of the pleasure gardens in "Vanity Fair" although they had by then begun to acquire an unsavoury reputation, and a number of brothels became well established in the surrounding streets, including at "Sluts Hole" - now a stables in Fitzalan Street. One visitor told the owner that "he should be a better customer ... if there were more nightingales and fewer strumpets". Ironically, the advent of the railways killed off the gardens and they closed in 1859. The site was subsequently built upon and I suspect that the present Spring Gardens were created by wartime bombing, aimed at the railway line.

Caneletto painted this famous view of the Grand Walk in 1751. 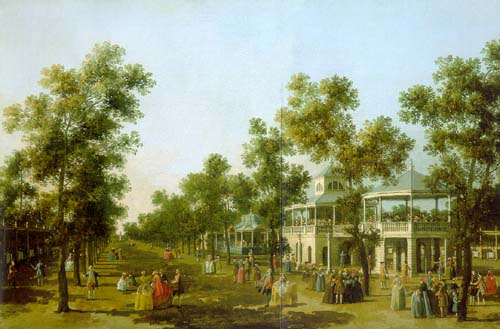 Here is a another view of the Grand South Walk around 1790.

And here is a view of Spring Gardens in April 2002, looking East.

Vauxhall (pronounced vokzal) is the Russian word for "railway station".   The full story is here.