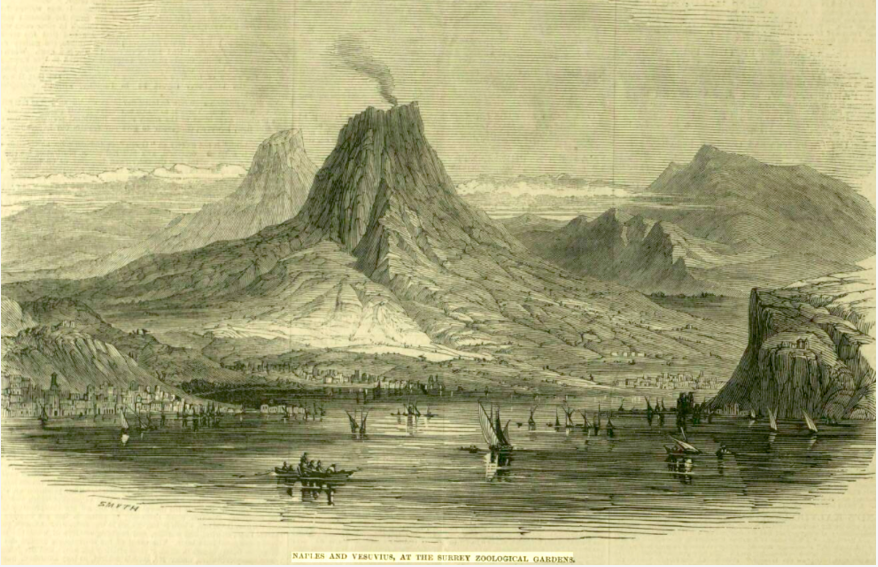 Pasley Park, behind Kennington Tube Station, is all that remains of the Royal Surrey Gardens opened in 1837. These pleasure gardens included the wonderful Surrey Zoological Gardens which exhibited lions, giraffes etc. as well as the above 'largest picture ever painted', installed over a boating lake so that visitors could pretend they were off the Italian coast rather than in central London. Even better, Vesuvius would, at dusk, appear to erupt with smoke, fire and 'subterranean thunder'!

But the attraction did not thrive beyond 1856 when the huge 12,000 seater Surrey Music Hall was built on part of the land, only to be destroyed by fire in 1861, leading to a High Court legal case to recover the costs of printing posters for an event that could not be held at the hall as a result of its destruction. The case established the doctrine of impossibility in English contract law.

Vauxhall Park was opened on 7 July1890, thanks in part to the efforts of Octavia Hill (left), who went on to co-found the National Trust. She intended that it would "... form one of those all too few central gardens to which the very young and the very old, the over-worked in brief intervals of work, the convalescent, and the quite poor may find near to their own houses the rest, the air, the outside peace they so often need." The grand opening, below, was by Albert, Prince of Wales.

But the park also owes its existence to the 1867 marriage of 19-year old Millicent Garrett to 33-year-old Henry Fawcett who, despite being blind, was both professor of political economy at the University of Cambridge and Liberal MP for Brighton.  In 1880, he was appointed Postmaster-General.  He had a particular interest in encouraging saving through the Post Office Savings Bank. He introduced the savings stamp which allowed people to save pennies at a time to build up the minimum account limit of a shilling. He pushed through parliament an act to allow savers to convert their post office savings to government stock and he developed the post office's life insurance and annuities schemes. He introduced many other innovations, including parcel post, postal orders, and licensing changes to permit payphones and trunk lines.

For some years the couple were based in Cambridge, where their only child Philippa was born in 1868, but from 1875 rented a London house, 51 South Lambeth Road, on what was known as the ‘Lawn estate’. Their double-fronted house, one of eight, probably dated from the early years of the 19th century and was set far back from the South Lambeth Road, behind the lawn for which it was named. Each house in the terrace had behind it a long, wide garden of about three-quarters of an acre.

The house was convenient for the House of Commons and Henry was pleased that within a short walk from Vauxhall Station ‘he was able to hear real birds, and the sound of wind among real leaves’. However, by the mid-1880s ‘The Lawn’ and the neighbouring ‘Carroun House’ estate had been sold to a developer, who planned to replace them with speculative housing.

In 1884 Henry Fawcett died suddenly, aged 51, whereupon Octavia Hill’s Kyrle Society, whose mission was ‘to bring beauty home to the people’, launched a campaign to save the area as a ‘Pleasure Ground’ in Henry’s memory. Millicent, who was by now a well-known speaker and writer on the rights of women, led the campaign, with the backing of Henry Doulton, whose pottery works stood close by. Henry had previously worked with him on preserving open spaces.

Eventually £17,500 was raised to buy the freehold of the eight-acre site, the houses were demolished, and the area laid out by the Kyrle Society’s landscape gardener, Fanny Rollo Wilkinson.   Coincidentally, Fanny was not only the first woman in Britain to become a professionally trained landscape gardener but had for some years been a close friend of Millicent Fawcett. The two women worked together on a projects to improve the position of women and became both neighbours and eventually sisters-in-law.

The Slades were another prominent local family who founded the Slade School of Art.  Here is information about Slade Gardens and the Slade Fountain in Kennington Park. 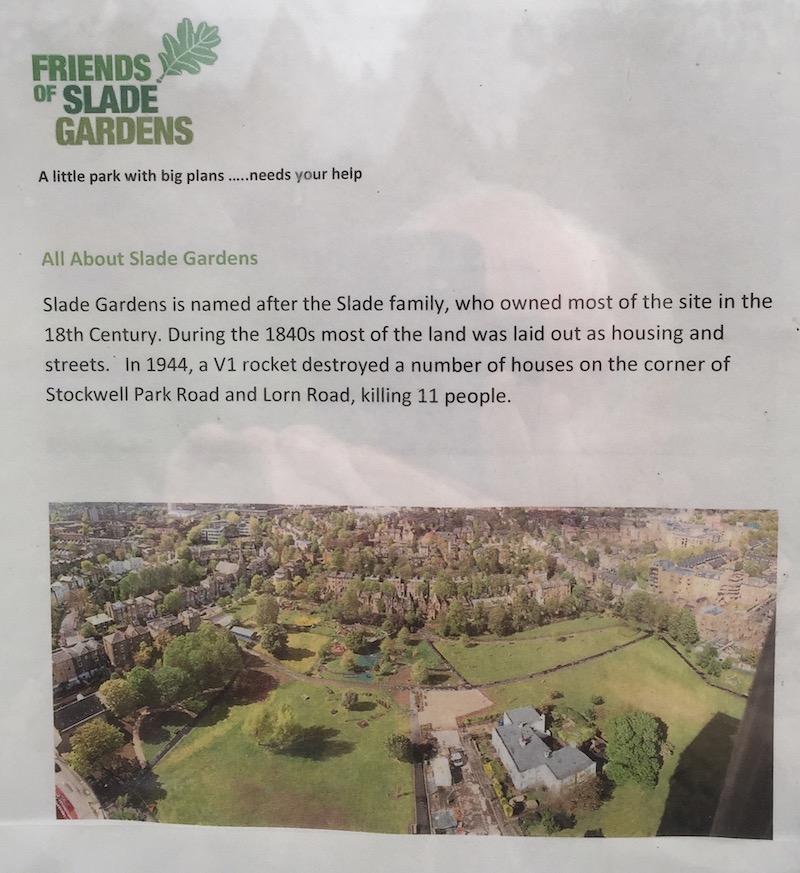 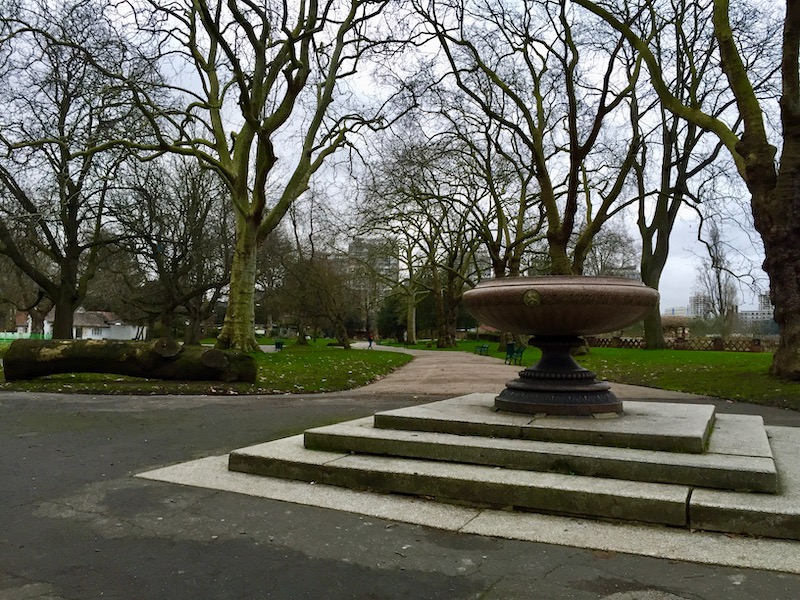 The Oval was originally a cabbage garden and was opened as a cricket ground in 1846. It was also the place where the first FA Cup Final was played in 1872 - in front of a 2000 strong crowd. 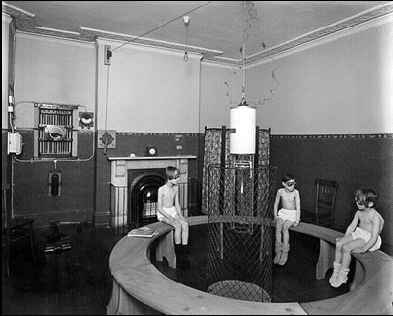 Many prominent local residents are buried in West Norwood Cemetery, about 4 miles south of Kennington but well worth a visit, especially on one of the open days. Originally laid out in 1836 as the South Metropolitan Cemetery. This was the second of the 8 large cemeteries established around London during that period. It is on a beautiful hillside site and contains some very impressive monuments. The Friends of the cemetery have established their own web site.

Henry Percy Adams and Charles Holden designed the Belgrave Hospital for Children, Clapham Road in phases between 1899 and 1926. The hospital is built on a quasi-cruciform plan, with separate ward wings linked by connecting corridors and bridges, thus ensuring the isolation of any wing during an outbreak of infectious disease. This image shows patients in the Artificial Sunlight Treatment Room. Artificial sunlight was used for the promotion and maintenance of good health. The patients are wearing goggles to protect their eyes from the ultra violet light. 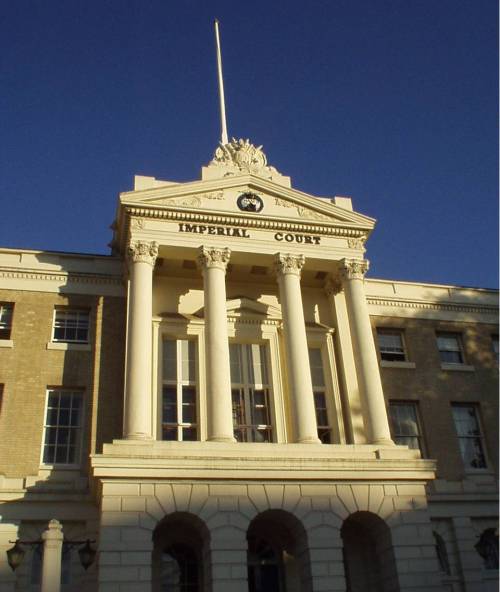 The photo on the right is of Imperial Court, on Kennington Lane near Kennington Cross - one of the most prominent buildings in Kennington. It was built in 1836 to house the Licensed Victuallers School and from 1921 to 1992 it was the headquarters of the NAAFI (The Navy, Army and Air Forces Institute). Along with the armed services themselves, NAAFI had to grow quickly at the start of World War II. At its largest there were 10,000 outlets including 800 ships' canteens and 900 mobile shops. Imperial Court is now an apartment block, but the NAAFI badge can still be seen at the top of the building.

Below are two photos of another beautiful building, also near Kennington Cross, just up Kennington Road towards the park.  It was built in 1852 and was Lambeth's Vestry Hall (i.e. town hall) and was then the headquarters of the Church of England's Society for Waifs and Strays - later the Childrens Society.  The older photo below shows the society's children awaiting a 1935 visit by King George V.  (Note the tram tracks.) 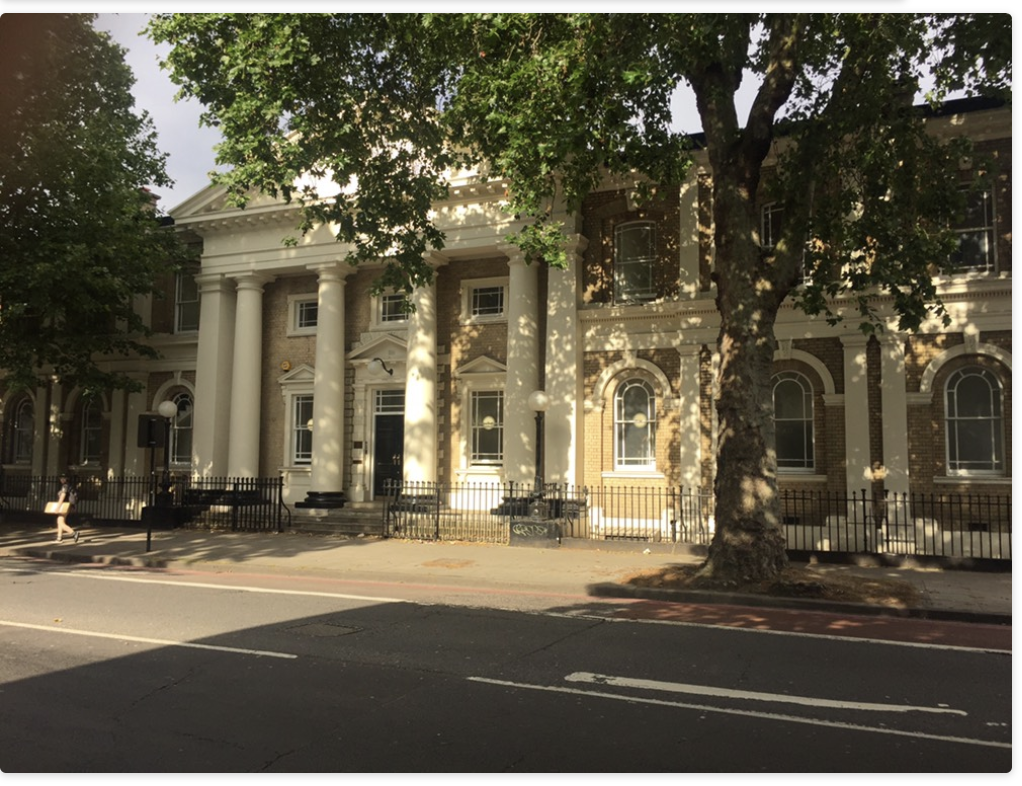 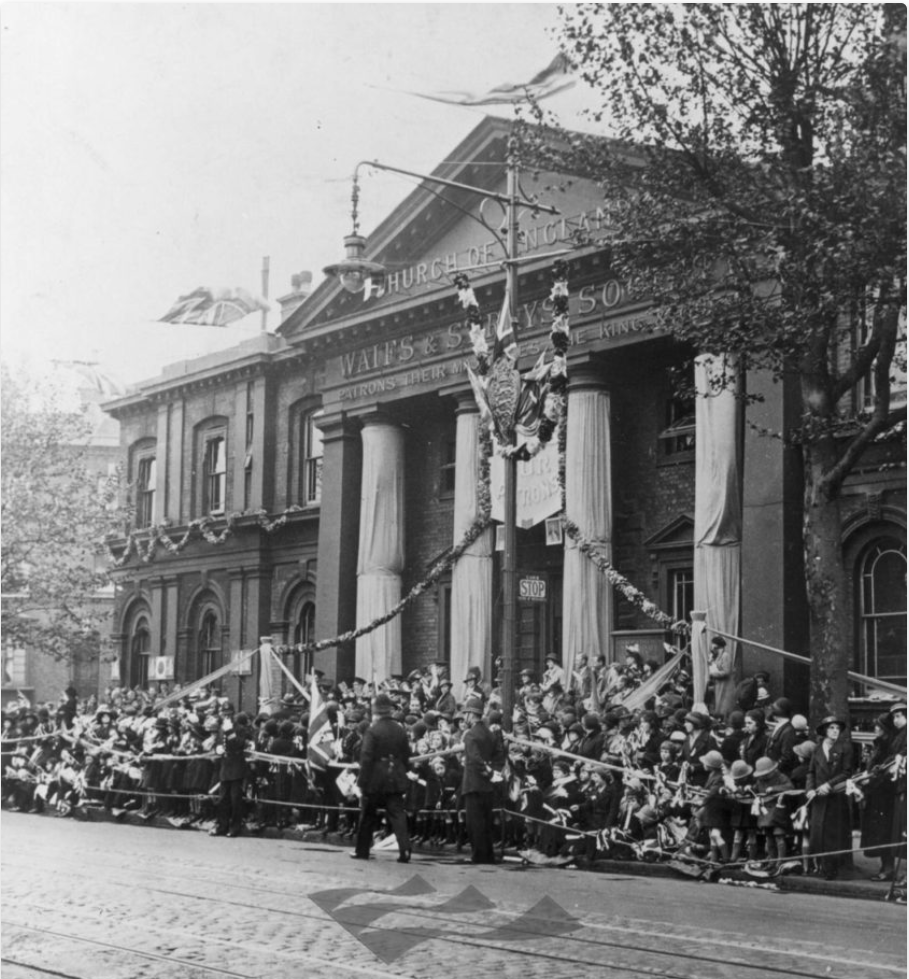 The Vauxhall/Kennington area suffered serious bombing during the Second World War mainly because it is near important railways and bridges over the Thames. It also got caught up in the 2005 London suicide bombing campaign.

One result of the bomb damage was much slum clearance and the creation of a large number of post-war high-rise "Council Estates":- local authority-built social housing. Many survive in good shape to this day, but some have deteriorated very badly, including the Aylesbury Estate to the east of the Walworth Road. 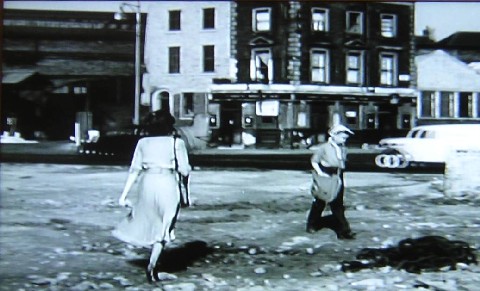 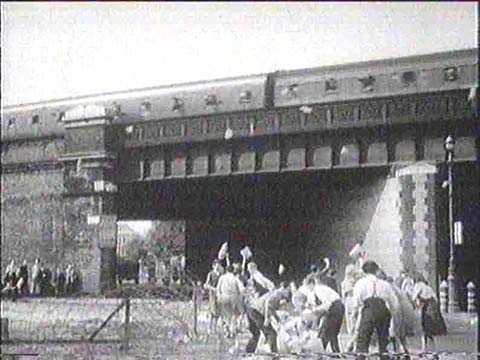 Another result was post-war film-makers could shoot the comedy Passport to Pimlico at the bombsite at the corner of Lambeth Road and Hercules Road - see left-hand photo above. The story involves a group of local residents finding that they are in truth Burgundians, declaring independence, being besieged by the government, and being sustained by food thrown to them by friends and neighbours, including those passing along the nearby [Waterloo to Vauxhall] railway line - see the right hand photo above.

Here are two more photos taken whilst the movie was being shot. The pub in the second photo was called the Union Flag. It is now the corner cafe at the junction of Lambeth Road and Hercules Road. 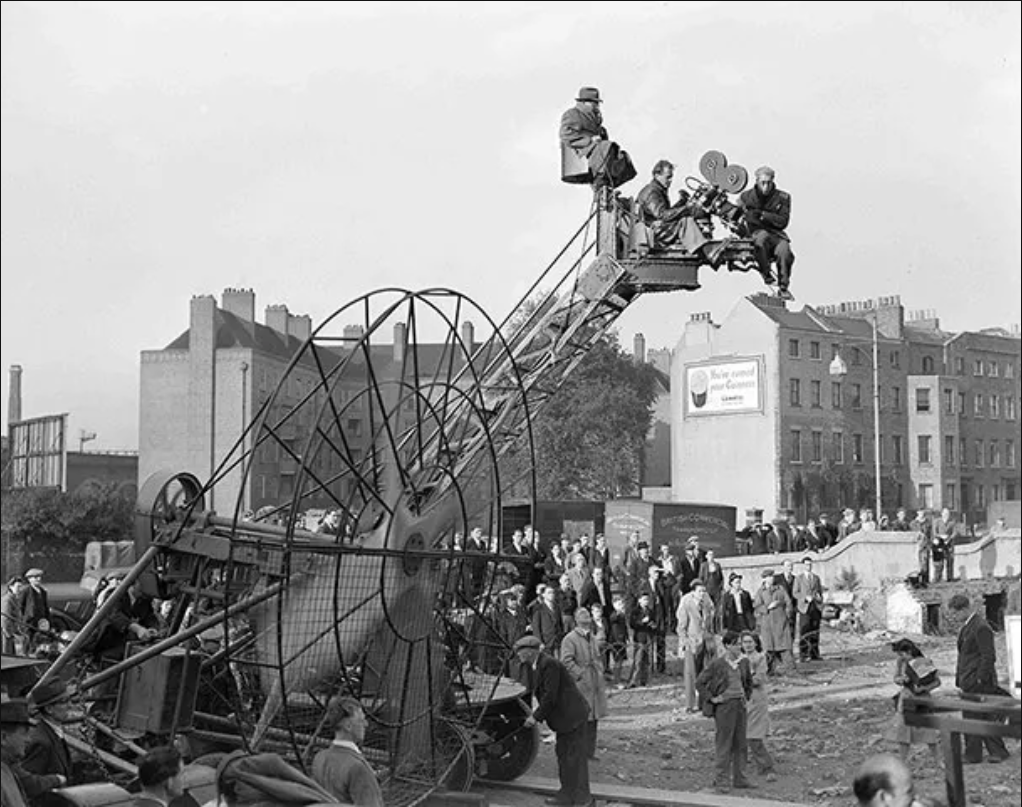 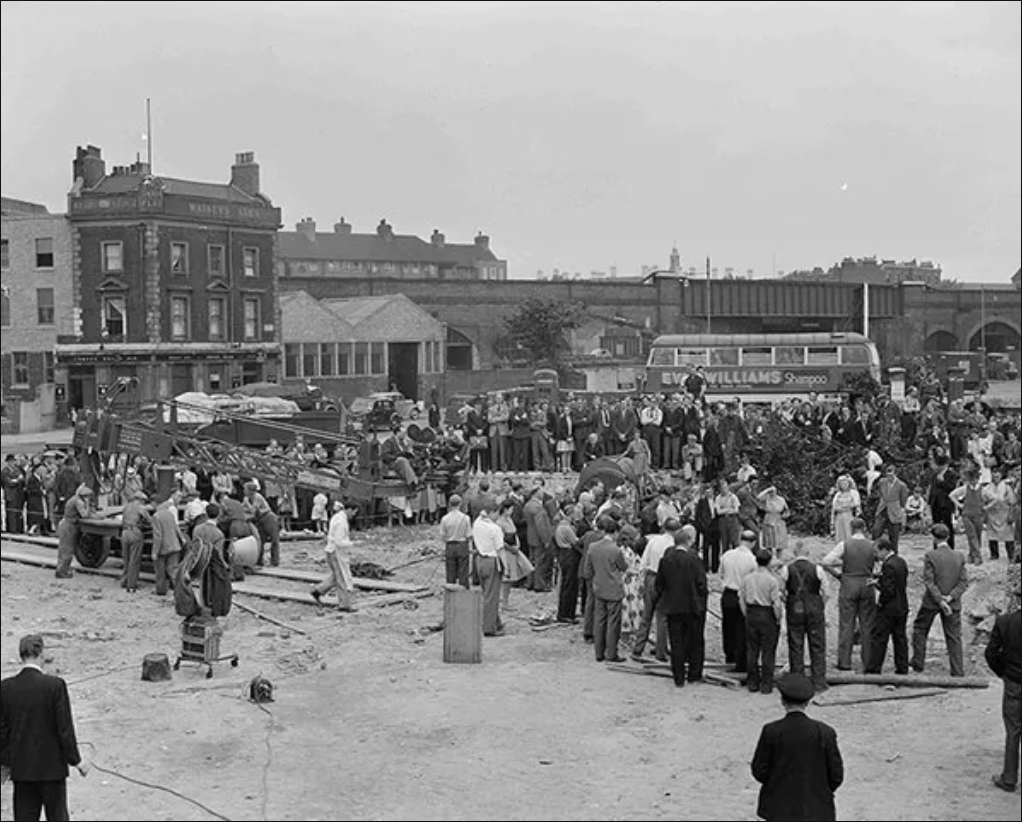 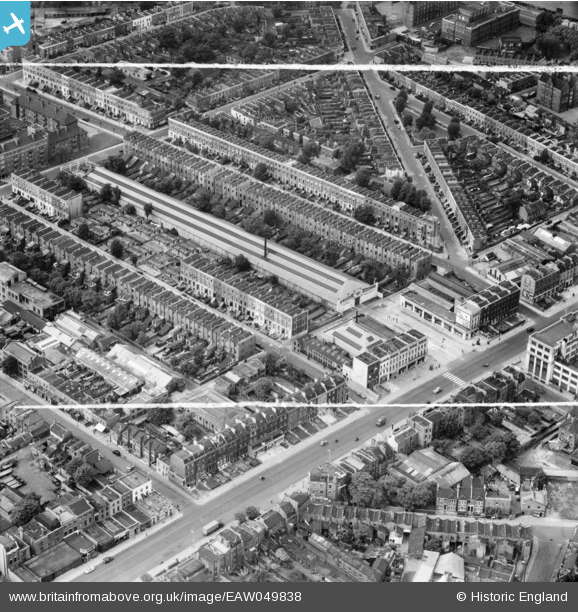 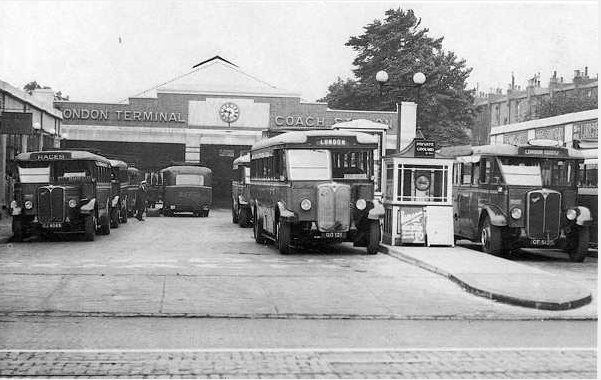 The first photo above shows the site of the London Terminal Coach Station as it was in 1953 behind bomb damaged Richborne Terrace. The coach station was originally opened in 1929 replacing a private garden known as 'The Shrubbery'. The offices etc. on the Clapham Road were destroyed by bombing during World War 2 and were replaced by Keith & Boyle's Vauxhall car dealership (which can clearly be seen in the photo) and then a car hire facility. The long thin garage area eventually became Usborne Mews. The second photo (above right) shows the coach station around 1931. 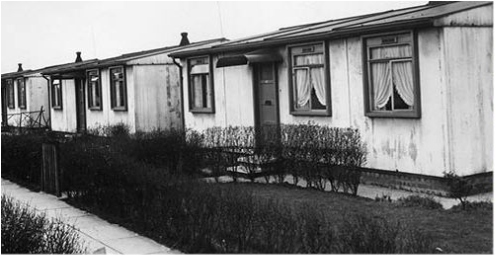 Another interesting feature in this photo are the 'prefabs' (small pre-fabricated houses) built hurriedly after the war to replace the long stretch of Richborne Terrace that was destroyed by a large bomb. The prefabs were in due course replaced by the maisonettes at Nos. 34-60 Richborne Terrace. The photo opposite is of some other, fairly typical post war prefabs before they were eventually demolished.

Sainsbury's Nine Elms was the first Sainsbury's supermarket to be built in London. It was opened by Prime Minister Margaret Thatcher in February 1982. It was demolished as part of the Vauxhall Nine Elms Development project and a new store opened on broadly the same site in 2016

Planes are today again prominent over Vauxhall, which is about 24km (15 miles) from Heathrow, on the approach flight path. Planes therefore pass over at about 1200 metres (4000 feet). Heathrow has a total of 1300 movements a day - i.e. 650 landings, but only about one third of them, on average, pass over Vauxhall. In good weather, and at peak times, there are only 50 seconds between each plane. The first arrivals in the morning can be as early as around 0430 (from the Far East) and the latest in the evening can be as late as 2300 (from Europe). But both times vary with the incidence of Summer Time, and the winds en route. 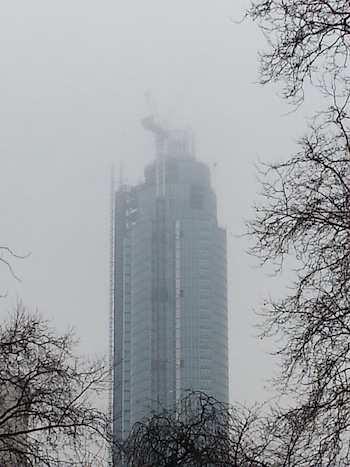 Helicopters, too, can frequently be heard flying along the river to Battersea Heliport. Tragically, one of them hit the jib of a crane being used to construct St George - Vauxhall Tower during the rush hour one morning in January 2013. The top of the crane and the top of the building were obscured by cloud at the time; see photo on right taken a few weeks later. The aircraft hit the jib of the crane only 11m below its 219m high tip, well above the top of the 185m high tower. The pilot and a pedestrian were killed when the aircraft crashed in the Wandsworth Road - see photos below - but it could have been much much worse ... 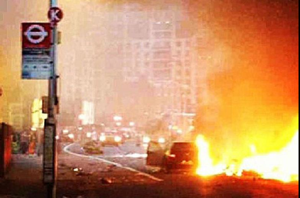 The 2010s saw an enormous amount of high rise and other development around Vauxhall and Nine Elms. Click here to read more about this transformation and to see some interesting old and new images.