The Effra was an important London river, running down from Crystal Palace and Sydenham Hill. It originally ran into the Lambeth Marshes to join the Earl's Sluice and run into the Thames at Deptford Wharf, but it was eventually diverted to join the Thames near Vauxhall Bridge. Most of the river is now underground, but there are two small sections still on the surface.

Like most rivers, the Effra had a number of sources, the most important of which was near the top end of what is now Norwood Recreation Ground, off Harold Road just down the hill from Crystal Palace. Here is a photo: 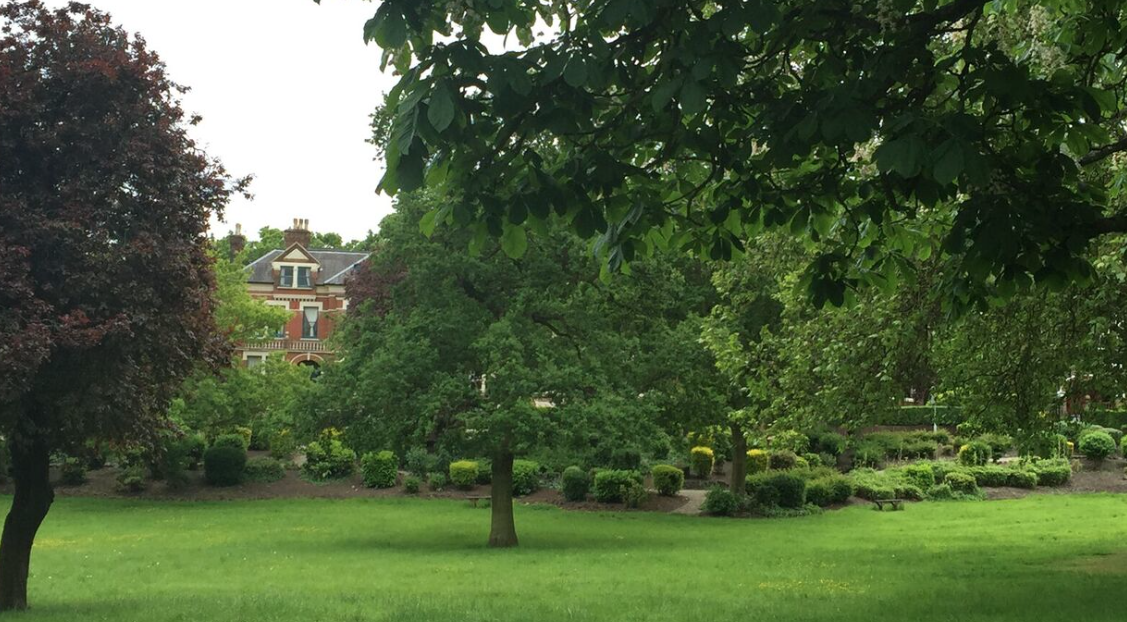 The river then ran, initially through a deep valley,

(There is a meandering lake in Belair Park, to the east of Croxted Road, but this appears to have been purely man-made, and not on the course of the Effra.)

Another important source was the Ambrook in Sydenham Hill Wood (Grid Ref TQ 3436 7257), next to what is now the derelict railway line running up from Nunhead to Crystal Palace (High Level). There is an occasional muddy stream and a small pond (Dewy Pond) between (a) the bat sanctuary in the old railway tunnel - first picture below - and (b) Cox's Bridge, from where Pissarro painted his famous picture of Lordship Lane Station - second picture. 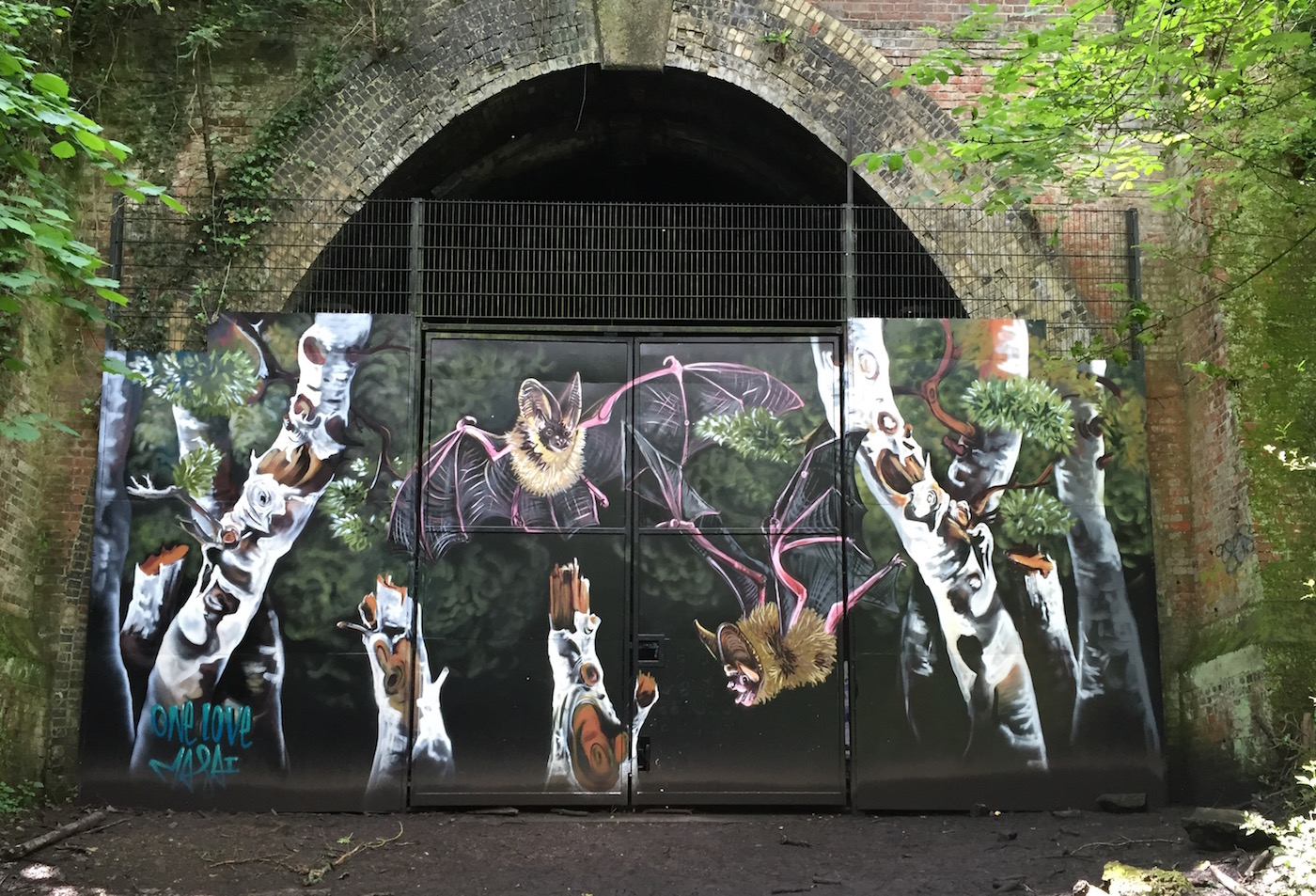 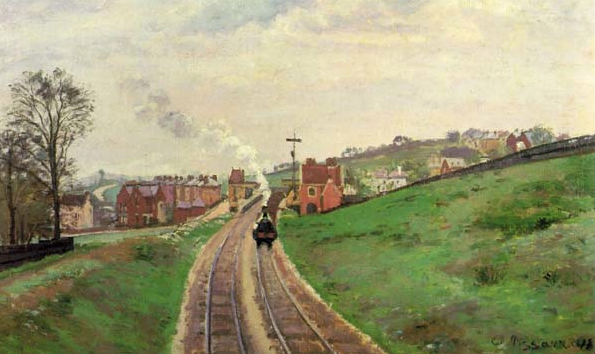 Here are pictures of Dewy Pond and the Ambrook before and after it runs through a distinct valley in the Dulwich and Sydenham Hill Golf Course. 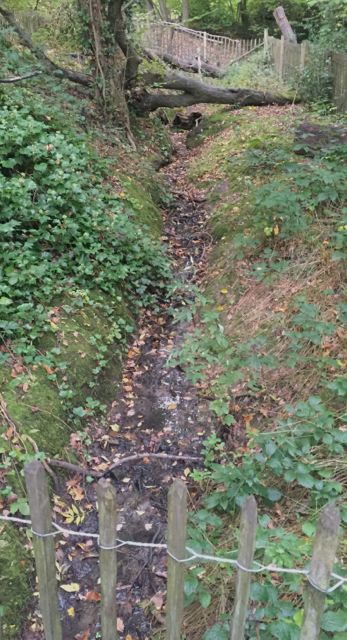 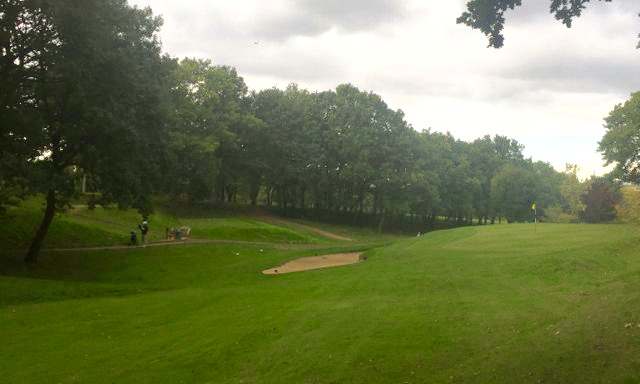 This stream then ran down through Dulwich Park, where this branch of the Effra may still be seen in the form of lakes and a stream, and joined the main river at or before Herne Hill.

Another tributary ran north along the west side of Brockwell Park, joining the Effra near Brixton Water Lane.

The now substantial river continued to run north in a shallow valley to the east of what is now Effra Road and then through the centre of Brixton and on along Brixton Road, up towards the Oval. Even today, there is noticeably higher ground to both the east and west of Brixton Road until its junction with Hillyard Street. And the road itself drops around 3.5 metres over the 1000m from Gresham Road to Hillyard Street - hardly precipitous but enough to create a sparkling stream.

North of Hillyard Street, the ground begins to drop away from Brixton Road, down to the north-east. The Effra ran down this slope into Lambeth Marsh. Click here for a more detailed discussion of the original course of the river.

The Diverted River: As London grew, mainly north of the Thames, the Effra was diverted so as to help drain the marsh and so create rich agricultural land to feed London's population. By the 1600s, therefore, the river no longer ran into Lambeth Marsh but instead ran across to Vauxhall. The 1744 map on the left shows the river (then called the Shore) to the west of the road though it later ran down the other side.

The final stretches of the river can be seen in a 1681 map on this web page and on the two maps below dating back to 1790 and 1830 respectively.

Short stretches of the river were navigable, near to the Thames at Vauxhall, but the river was certainly not navigable for any great distance. 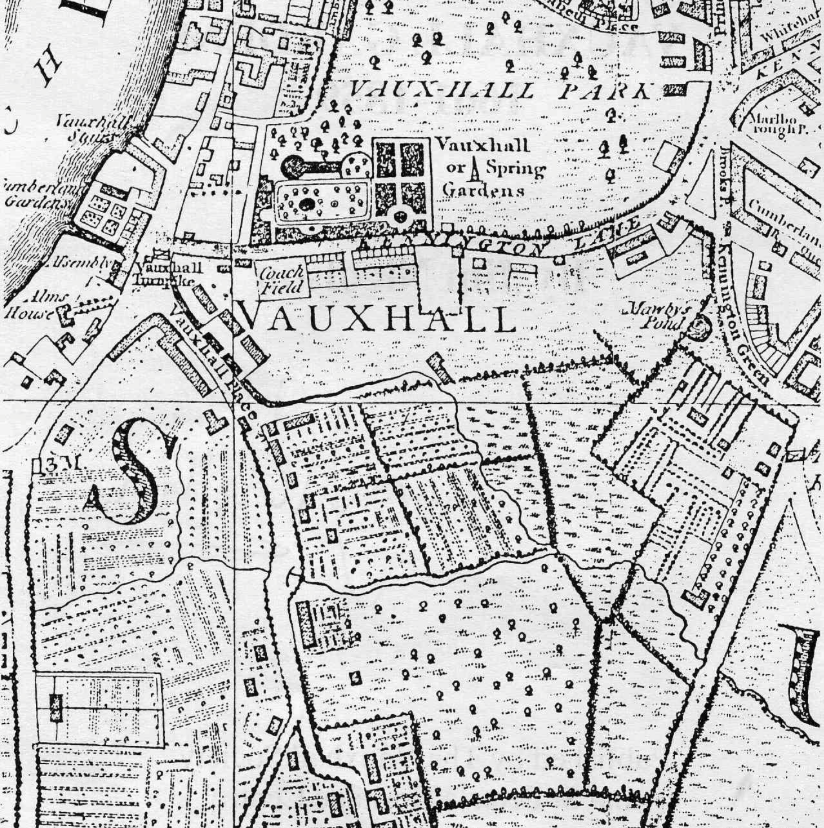 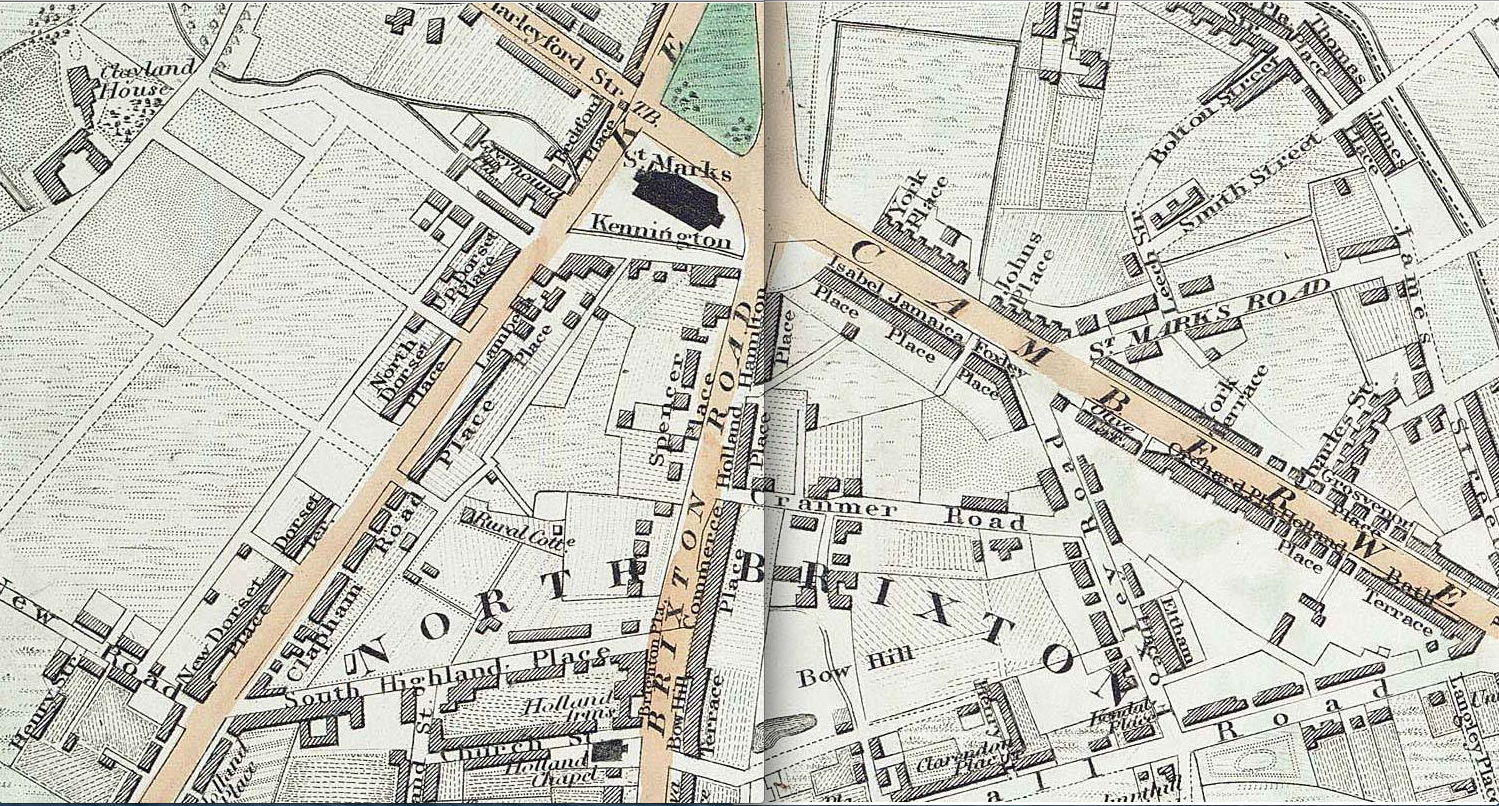 The whole of this northern section of the Effra was eventually covered over. A storm sewer was later connected to the underground Effra, and this discharges into the Thames just downstream of Vauxhall Bridge.

I strongly recommend Jon Newman's River Effra: South London's secret spine as the most detailed and well-researched guide to the Effra. But Tom Bolton's London's Lost Rivers: A Walker's Guide is also very good, and covers many other rivers as well, although it was written before it was realised that the Effra originally ran into Lambeth Marsh. Graham Gibbard's On Lambeth Marsh is a very detailed history of what is now the South Bank and Waterloo. Nicholas Barton's The Lost Rivers of London and Paul Talling's London's Lost Rivers are also good reads, with much better photos than the previously mentioned guides. 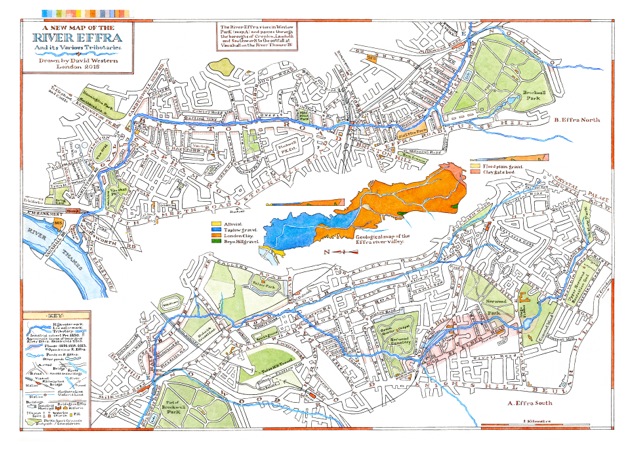 On the web, I enjoyed geographer Martin Knight's interesting article about the ways in which the River Effra helped to shape local patterns of land use, transport and settlement. And another of Martin Knight's articles is equally interesting, not least for the photos. London Geezer has written an entertaining blog about the Effra, and a fascinating history of the frequently-flooded and cholera-ridden Lambeth waterside is here. But at least Dr John Snow was eventually able to use Lambeth in his Grand Experiment to prove that Cholera was water- (not air-) borne.

A two-part history of the Nunhead to Crystal Palace railway is here.

A general history of Lambeth, Vauxhall and Kennington and a guide to the availability of old maps of London can be accessed via this site's home page. Note in particular the availability of a wide range of old Ordnance Survey maps from Alan Godfrey Maps.