Two famous collectors also moved into the area in the 1600s. The Tradescants lived in a house and 3 acres beside the South Lambeth Road - and Elias Ashmole (founder of Oxford's Ashmolean museum) moved in next door. Follow this link for the full story. 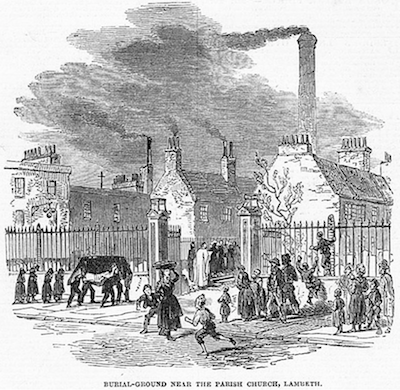 Lambeth Village prospered south of St Mary's Parish Church and along both sides of Lambeth High Street until the late 1700s, but slowly declined thereafter. One major cause of this was the building of the various Thames bridges, which caused traffic to start flowing east/west rather than north/south along the line of the Thames at Lambeth. The area also became more industrialised, the railway to Waterloo was built in 1848, and the Albert Embankment was built in the 1860s, providing an alternative north/south route. Finally, and to some extent as a result of these changes, more salubrious settlements grew in Waterloo, Vauxhall and Kennington. So Lambeth High Street became a very quiet backwater which now has only one pub and the Old Paradise Street parish burial ground (picture on the right) - now Lambeth High Street Recreation Ground. 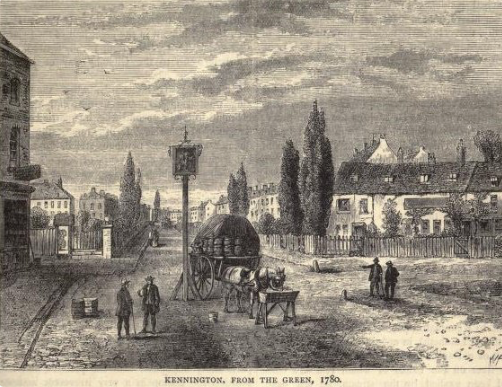 And here on the left is a nice picture of Kennington Green in 1780.

One prominent local family were the Dollonds who were originally microscope and telescope manufacturers, and then opticians. Their business - originally opened in Kennington in 1750 - merged with Aitchison & Co in 1927 to form Dollond & Aitchison, until recently a well-known high street chain of opticians, and now part of Boots Opticians.

Captain Bligh (1754-1817) was another notable local resident. He survived a 5,800km voyage in an open boat following the "Mutiny on the Bounty", came to live at what is now 100 Lambeth Road in 1794, and is buried in St Mary's churchyard.

Beautiful West Square, in 1796, became the site of an important optical telegraph station on the route between the Admiralty and the port of Deal. 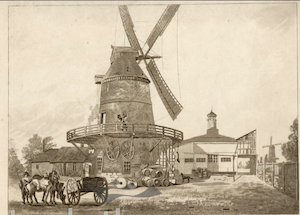 This 1789 mill was used by the Apothecaries Company to grind drugs.  It was situated on Mill Street - now Juxon Street  - and was demolished in 1867 to make way for the railway and housing.  (Click on the image to see a larger version.)

One other famous local resident was the illustrator Arthur Rackham who was born (the 4th of 12 children) in 1867 in a house on the South Lambeth Road. His father was a senior clerk of the High Court and the family later moved to nearby Albert Square. Arthur went on to illustrate more than 60 books, including Peter Pan and The Wind in the Willows - see below.

Famous artist Vincent Van Gogh lodged at 87 Hackford Road between 1873 and 1874 while working for an art dealer in London.

Vauxhall Bridge was completed in 1816 when it was initially but only briefly called Regent Bridge. This encouraged development further south - but still away from the river. The original bridge was replaced in 1906 when it became the first London bridge to carry electric trams. These were based at what is now the Walworth Bus Garage which takes up much of the triangle of land on the north side of the Camberwell New Road, just beyond the railway and west of the Camberwell Road. It was large enough to house 135 bogie cars.

The art on the sides Vauxhall Bridge is fascinating. The lady on the right, holding a steam engine, is 'Engineering'.

The railways - first overground, then underground - arrived in Vauxhall and Kennington in the mid 1800s. Click here for more detail.

Lambeth Bridge, between Westminster and Vauxhall bridges, was completed in 1862 - and then replaced, slightly upstream, in 1932. The pineapples at each end of Lambeth Bridge commemorate the Tradescants who were the first people to grow pineapples in England. 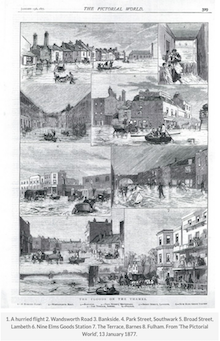 There was a serious flood in 1877. Click on the image opposite to see a larger version.

A flavour of the hectic pace of development in the late 1800s was provided by the first vicar of St John the Divine, a church created to bring the Christian Gospel to the poor of South London:

'Two or three wide roads, lined with villas of decayed grandeur; a few lanes and courts tenanted by squalid poverty; and long, unlovely streets just built and occupied (each tall house by several families) before the mortar and plaster were dry ...'. 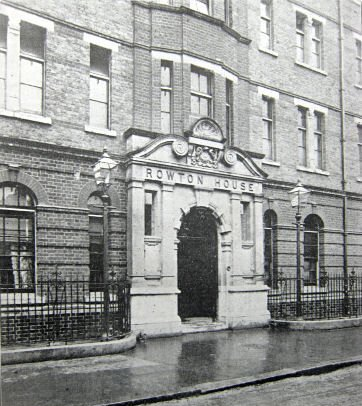 It was therefore no coincidence that the first hostel for homeless men, Rowton House, was opened in Vauxhall in 1892.

Joe Lyons lived at 21 Fentiman Road in the late 1800s.  He and colleagues established J. Lyons and Co. which, from modest beginnings as supplier of catering to the Newcastle Exhibition in 1887, went on the become the largest food company in Europe. The company also built and operated the world’s first business computer which they called LEO (Lyons Electronic Office).

The company was probably most famous for its Lyons teashops and Corner Houses which in turn employed "Nippy' waitresses.

"A pleasant personality was judged more important at Lyons than good looks and it seems there were a lot of men looking out for a pleasant personality. Picture Post in 1939 reported that there were a total of between 800 and 900 Nippy marriages every year.  Lyons claimed that the marriage rate among Nippies was higher than any other class of working girl and that the job was of course excellent training for a housewife."