Things to do in and around Vauxhall, Kennington & the Oval

This is a list of the principal places of interest.

Vauxhall Park - pictured above - and Kennington Park (pictured below) are lovely throughout the year. Both have good playgrounds and excellent cafes. 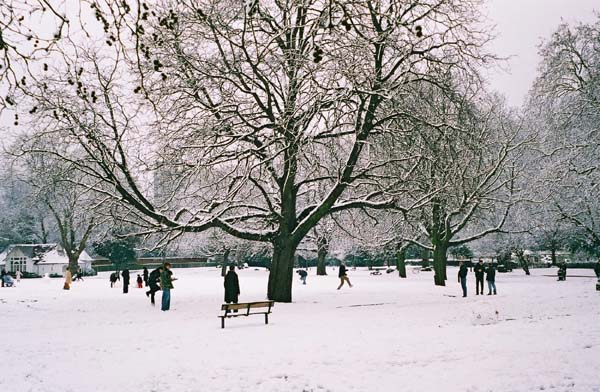 Vauxhall Park has a delightful Model Tudor Village built by Edgar Wilson who also built villages in Finsbury and Brockwell Parks elsewhere in London, and in Fitzroy Gardens, Melbourne, Australia - the latter a gift from the citizens of Lambeth in appreciation of the food sent from the State of Victoria during the Second World War.

Melbourne's is now the most complete of the four villages, followed by Vauxhall.   There are only four houses left in Brockwell Park, near the walled garden.  There are no remains of the village in Finsbury Park.

The Imperial War Museum is a "must see", not least because it avoids glorifying war but examines war from many different perspectives.

There are two fringe theatres in the area.

The White Bear Theatre Club at 138 Kennington Park Road - very near Kennington tube station - was voted "Best Fringe Venue" and "Best Up and Coming Theatre" in 2001. There are plays most evenings and tickets are excellent value at £8.00.

And the Oval House Theatre hosts a wide range of plays, exhibitions and other events. It can be a good place to spot up and coming talent:- Pierce Brosnan began his career here. 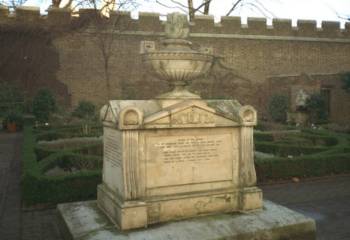 The world's first Museum of Garden History is in the restored church of St Mary-at-Lambeth next to Lambeth Palace. It is a wonderful museum if you are interested in plants and gardens, not least because of its strong connections with the Tradescants who are buried in the churchyard .... as is Captain Bligh of the "Mutiny on the Bounty" who lived in Lambeth Road. Here is a picture of his grave:-

There is a well established and lively gay scene around Vauxhall Cross. The best known venue is the Royal Vauxhall Tavern where numerous performers began their careers, including Paul O'Grady (aka Lily Savage). Or you could check out the gay scene along the road in Camberwell. There is a full listing at the Gay Camberwell website.

The best walk in London starts at Vauxhall Bridge and follows the south bank of the Thames to beyond Tower Bridge. The views are spectacular, you pass scores of interesting places, and you don't cross a single road until you are very close to Bermondsey Station - just over 4 miles from Vauxhall. And if the tide is out (check the times at Easytide) then you can get down on the foreshore at a number of places, including onto a rather good sandy beach just 300 metres or so downstream from Waterloo Bridge.

The Horniman Museum is the premier south-of-the-river museum and includes a very attractive and interesting aquarium (I particularly like the jellyfish!) as well as some fascinating African exhibits, a mini Natural History Museum and frequently changed special exhibitions. There is really is something to interest every age and every taste, all set in a beautiful hill-top park. The address is 100 London Road, Forest Hill, London SE23, admission is free, and bus 185 (from Vauxhall and the Oval) stops right outside. 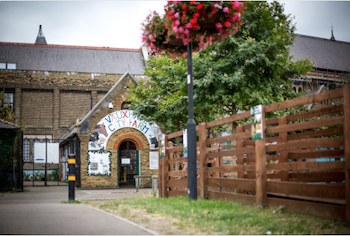 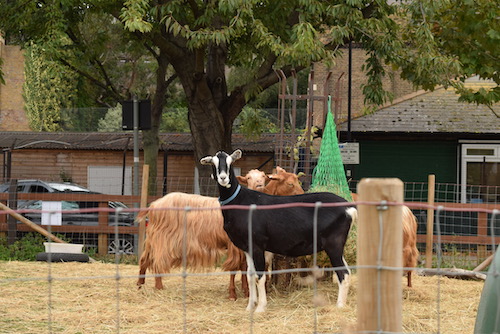 The Cinema Museum has a superb and unique collection of cinema memorabilia (lots of movie cameras that can project any format, posters, ushers' uniforms, chairs, doors and windows!) and is housed in the old Lambeth Workhouse where Charlie Chaplin ended up as a child. Its address is The Master's House, 2 Dugard Way, London SE11 4TH and, although it does not have regular opening hours, tours are readily arranged by appointment. 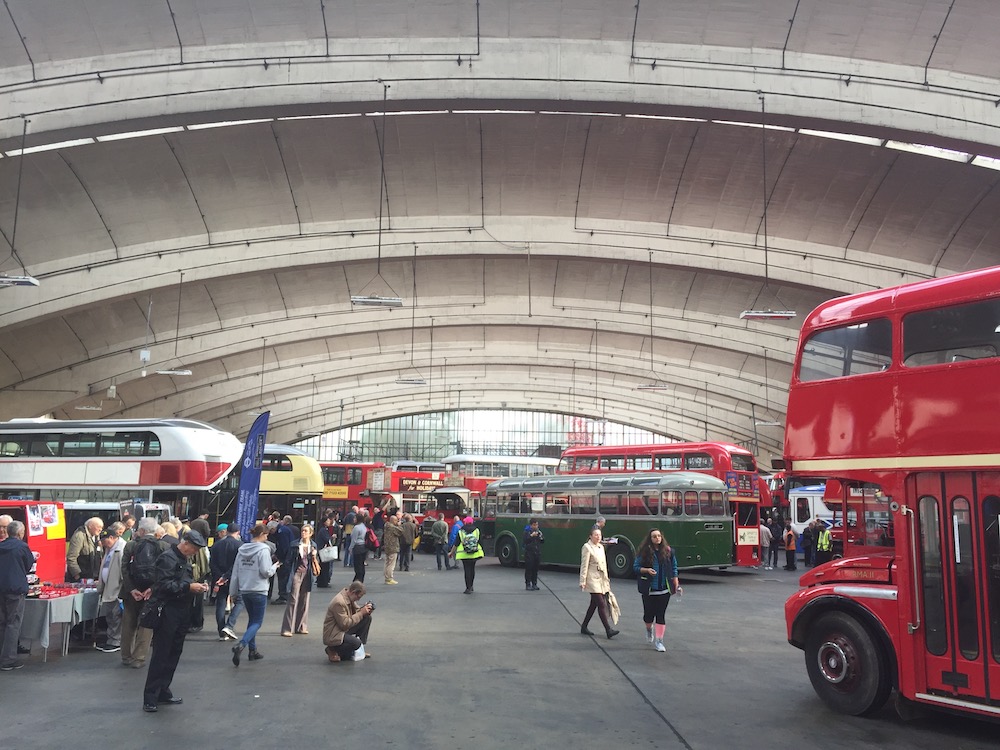 In 1952, the newly completed Stockwell Bus Garage had Europe's largest unsupported roof span. The garage could originally house 200 buses, required at a time when the last trams were being replaced by buses. There was a steel shortage at the time, so concrete was used for the roof structure instead of the steel girder structure that had previously been the norm. At Stockwell, the opportunity was taken to create a bravura piece of reinforced concrete design, building a formerly residential site cleared by the Blitz.

Lambeth Palace, next to Lambeth Bridge dates back to the 1200s. But it is usually only open during Open House Weekend every September, or for the Lambeth Parish Fete (Gardens only) in June. 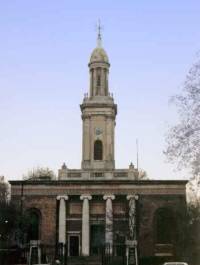 Pictured on the left, St Peter's Church in Liverpool Grove, just off the Walworth Road, is the best preserved of the churches designed by Sir John Soane, one of England's greatest architects. The weather vane on top of the dome was controversial at the time the church was consecrated in 1825. The son of a bricklayer, Soane was the architect of many famous buildings, including the Royal Hospital in Chelsea and the interiors of 10/11 Downing Street. He turned his house at 12 Lincoln's Inn Fields into a wonderful museum, which is still open to the public.

St John's Church (on the roundabout at the South/East end of Waterloo Bridge) hosts free concerts by the excellent Southbank Sinfonia every Thursday from 1800-1900. And you can have a glass of wine, too!

St John the Divine in Vassall Road SW9, is "the most magnificent church in South London" according to Sir John Betjeman.

London Duck Tours offered amphibious vehicle tours beginning with a drive round Westminster before the excitement of splashing into the Thames at Lacks Dock (just north of the MI6 building, itself just north of Vauxhall Bridge) for a sail down to Westminster Bridge and back.   The tours departed from the back of the Marriott Hotel, on Westminster Bridge, and places could be booked on 7928 3132.  However, the service is currently suspended because the slipway is being used to build a new super-sewer under the Thames. 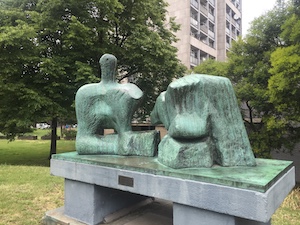 This Henry Moore sculpture (Two Piece Reclining Figure No. 3) is on the Brandon Estate - behind Molesworth House, south-west of Royal Road near Kennington Park.   Click on the image to bring up a much larger one.

The London City Singers are a small capella music group for women which meets and practices in London near St Paul's Cathedral. They would love to welcome anyone who has a passion for singing or would like to try it out.

The Bonnington Centre in Bonnington Square, just off Vauxhall Cross, offers a vegetarian cafe and wide range of activities - from tango to yoga!

Local residents interested in photography might like to join the Camera Club at 16 Bowden Street, just behind Kennington Cross. The club is in attractive renovated premises which offer a superb range of facilities, including a digital suite for manipulating and printing digital images, as well as a studio and darkroom for more traditional photo technology. Lambeth residents get a one-third discount on the normal annual fee. 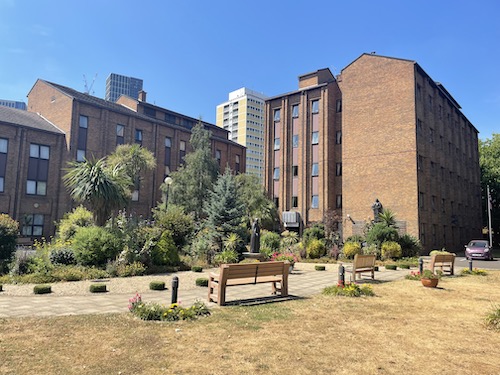 [The Type Archive has now closed permanently and its contents are being stored elsewhere.  It used to be at 100 Hackford Road, SW9 in a range of industrial buildings built between 1895 and 1905 as a veterinary hospital. Its mission was to collect, preserve and interpret the historic artefacts associated with the spread of the printed word and image throughout the world, and to place them in the context of modern technology and design, and of the far longer history of mankind's use of graphic symbols. It had a number of key collections including:

Open Days used to be held each month, including demonstrations of a range of skills, usually including punch and matrix making and type casting.]