It is intended that the area south of the River Thames, between Vauxhall and Chelsea Bridges, will become home to around 30,000 new residents living in c.18,000 new homes. It is also hoped that c.25,000 permanent jobs will be created. But many of the homes will be sold to non-residents who will either let them out or simply hold them vacant in the expectation of reaping large capital gains ("buy to leave").

Here are photos taken from Ruskin Park in 2015 and 2021 respectively. 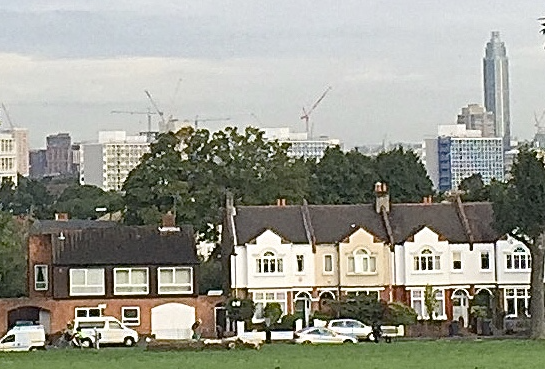 The background to this development is below.

A history of the Vauxhall area and links to further historical detail may be found here.

A photographic history of Vauxhall Cross is here.

Information about the development of Vauxhall Cross from 1999 to 2012 is here.

I have compiled a photographic record of the post-2012 development of the VNEB area, including artist's impressions and models. Please email me if you would like to see it.

Mayor Ken Livingstone was personally strongly associated with the Greater London Authority's London Plan which designates Vauxhall as an "Opportunity Area" - that is a place "with potential for significant increase in density". In other words, high rise buildings were to be encouraged. The first Vauxhall Cross development was St George Wharf, the very large apartment, hotel and office development by the Berkeley Homes/St George Group on the Effra Site by Vauxhall Cross and just upstream of Vauxhall Bridge.

But the planners and developers soon had their eyes on the whole area stretching from Vauxhall to the Battersea Power Station - including New Covent Garden Market. This is an important market because ancient laws require fresh produce to be sold in four separate London markets. Fish must be sold in Billingsgate Market - originally on Lower Thames St in the City but now in Docklands. Meat must be sold in Smithfield Market - still on its original site. And fruit and veg must be sold in Spitalfields - originally near Liverpool St Station but now in New Spitalfields in Leyton, North-east London - or in Covent Garden Market - originally north of the Strand but now in Vauxhall/Nine Elms.

The new Covent Garden Market went into severe decline as supermarkets etc. began to bypass it, but has since diversified. A government report in November 2002 said that the four markets would not survive unless they became mixed markets and "one stop shops". The report recommended that central London should be served from New Covent Garden, but the Corporation of London (who own the other three markets) strongly disagreed and backed the New Spitalfields Market. But the Government decided to accept the recommendations of the 2002 report, thus beginning a legal battle with the Corporation which the Government won in June 2006. So the future of the New Covent Garden Market was secured.

There then followed four inter-related announcements in the autumn of 2009:-

First, Wandsworth Council announced that it had given outline planning permission for the US Embassy to move to Nine Elms following its relocation from Grosvenor Square. Permission was subject to the creation of a new park, improvements to the riverside walk, and a new pedestrian and cycle path linking Wandsworth Road and Nine Elms Lane, so improving cycle access from Kennington to Battersea Park. The new embassy is the cube shaped building shown in some of the photos opposite.

Second, Mayor Boris Johnson announced big plans for the area when he published a draft strategy in conjunction with Wandsworth and Lambeth councils. The document envisaged the building of 16,000 new homes by 2026 as well as offices and business units, creating 20,000 to 25,000 jobs. The document states: "The opportunity area is the largest remaining development opportunity within the central activities zone and is vitally important" and notes that the area has never attracted massive investment because it is divided by busy roads and overground train lines into Victoria. "Redevelopment of the area provides a unique opportunity to overcome these historic industrial barriers." The strategy document for the Vauxhall/Nine Elms/Battersea "opportunity area" covers a 195-hectare site that includes Battersea Power Station, the New Covent Garden Market and the proposed new American Embassy.

The document implied that there was no chance of progress unless there was massive investment in transport links - with little or no money likely to come from public funds. The Mayor's key wish, therefore, was for a privately funded extension to the Northern Line from Kennington via Nine Elms to Battersea Power Station, which is the subject of private redevelopment plans - see further below. But he would also like to see a new "wobbly bridge" linking Nine Elms with Pimlico as well as many more buses along Nine Elms Lane and extra capacity at Battersea Park train station. The plans also included:

Third, the New Covent Garden Market Authority announced plans to create a new trading space and flower market and redevelop the rest of their site, building three office blocks up to 46 storeys high plus smaller blocks incorporating 1800 new homes together with restaurants, cafes and a hotel.

The fourth announcement was by Dublin-based company, Treasury Holdings, who then owned the Battersea Power Station, probably the largest city-centre brownfield site in Europe, and still the largest brick building in Europe. They acquired the site from Parkview International, together with its associated outline planning permission, in November 2006. The company's first public move was to lodge an application in October 2009 for planning permission to turn the site into a £5.5 billion residential complex. The proposals would see 3,700 homes built alongside offices, shops and restaurants on the 40-acre site. The scheme also included a riverside park and an extension to the Riverside Walk connecting through to Battersea Park. Public access would be given to restored areas, such as the two turbine halls and control rooms. In return, the developers pledged to save the power station itself, which is listed Grade II*, and create a "low-carbon environment". The developers said that they had been encouraged that there has been progress in the planning of an extension of the Northern line from Kennington to two new stations at Nine Elms and Battersea Power Station - see further above. But Treasury Holdings went into administration in late 2011, so the power station was put up for sale again. The Malaysian purchasers were expected to pay £200m towards the cost of the Northern Line extension. The first residential apartments went on sale in 2013 but construction of Phase 1 will not take place before2016.

Wandsworth and Lambeth Councils claimed that the Vauxhall Nine Elms Battersea area would become home to around 30,000 new residents living in c.18,000 new homes. It is also hoped that c.25,000 permanent jobs would be created. But the housing would be very dense so as to be highly profitable for the original landowners and/or developers; Oliver Wainwright describes thickets of towers ... overshadowing gloomy slivers of private-public space at the bottom of their steep canyons.

Click here to see what happened next and how Mr Wainwright's fears turned out to be justified.