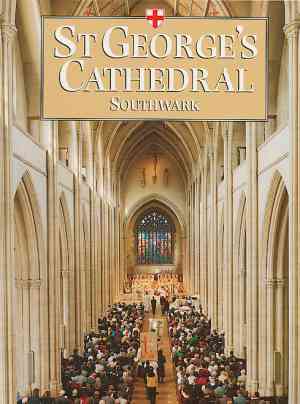 St George's is South London's Roman Catholic Cathedral and is situated on Lambeth Road, on the corner with Westminster Bridge Road, just along the road from the Imperial War Museum. It has its own website.

Roman Catholics were persecuted in England until large scale Irish immigration, not least to South London, encouraged increased toleration, marked by the Catholic Relief Act of 1778.  A protestant protest against the Act was led two years later by Lord George Gordon who gathered a crowd in St George's Fields and marched on Westminster, beginning the week-long destruction of Catholic property known as the Gordon riots*.    But the Act was not repealed and the first Catholic chapels were built, including one dedicated to St George where, at least according to tradition, the first High Mass was celebrated in London (outside the chapels of Ambassadors) since the time of James II.

Father Thomas Doyle came to the chapel in the 1820s. The passage of the Catholic Emancipation Act in 1829, removing nearly all the remaining legal disabilities of Catholics, and the growth of Fr Doyle's congregation to 15,000, encouraged Fr Doyle to promote the building of a large church whose altar was to stand on the spot where Lord Gordon's march began some 70 years earlier. The building was designed by AWN Pugin (although shortage of funds restricted his ambitions) and the church was opened on 4 July 1848. The Pope restored the English Hierarchy in 1850 and St George was chosen as the cathedral church for the new diocese of Southwark. It remained the only Catholic cathedral in London until Westminster Cathedral was opened on Victoria Street about 50 years later.

St George's was destroyed by fire caused by an incendiary bomb on 16 April 1941 during the second world war. But it was soon rebuilt and re-opened on 4 July 1958, 110 years to the day since its original opening.

*Ironically or intentionally,  the Cathedral's high alter stands on the spot where the march began.

The Cathedral is particularly remembered as the temporary resting place of the body of Thomas McSwiney, a very devout catholic, an MP and Lord Mayor of Cork before Irish independence.  He was locked up in Brixton Jail on trumped up charges and went on hunger strike.  His cause was very popular with the public but the Government refused to give way and, after 74 days without food, McSwiney died on October 25th 1920.

His martyrdom inspired many future revolutionaries. According to MacSwiney’s biographer, Dave Hannigan, a young Vietnamese man named Nguyen Tat Thanhn was working in the kitchen of a central London hotel at the time. Upon hearing the news of MacSwiney’s death, he burst into tears, saying “a country with a citizen like this will never surrender”. He returned to Vietnam, changed his name to Ho Chi Minh, and led the Vietnamese resistance movement for three decades, fighting Japanese and French imperialists and later the United States.