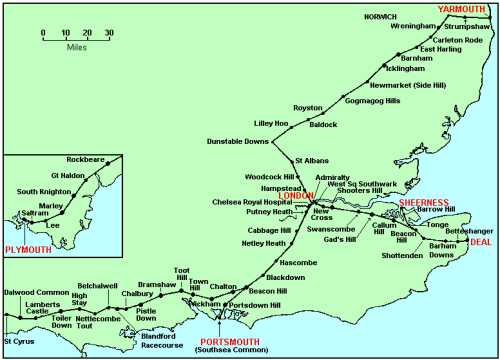 The line through West Square (using shutters) was opened in 1796 and closed in 1814. It was reopened to Chatham (using semaphores) in 1816 and closed in 1822. The site of the telegraph is accordingly shown on the 1802 Fairburn map of London (see the old maps part of this website), but not on later maps.

You can look round the semaphore station at Chatley Heath, Surrey which is now a National Trust property. It is a great day out of London, whether you walk from a nearby station or drive to its car park near the junction of the A3 and M25.

A separate webpage describes Nine Elms, Vauxhall's role in the Admiralty's development and testing of the electric telegraph.